Cages, fences, concrete walls, and ceilings; these are all things that one would see in a prison. At the Apartheid Museum there was a feeling of imprisonment, a sense of not being free. At the museum it was interesting to trace the history of an era of injustice.

I have always been fascinated by history because it gives me a greater understanding of why things happen. On this trip I wanted to learn about the origins of Apartheid. I wanted to know how a people such as the Afrikaners could experience oppression by the British, and then turn around and oppress another group. I also found it interesting how even though they are on the other side of the world, South Africans have a very similar history to us. In trying to understand Apartheid I was lucky enough to get many different perspectives. I spoke with people such as F.W. de Klerk, Peter Harris, Pregs Govender and Chené, Ward’s friend. I learned that there are many little pieces of the puzzle, but one major factor that drove Apartheid was fear. This is what I have gathered throughout this trip.

The Afrikaners are the descendants of the Dutch that colonized South Africa. When the Dutch power faded the British came to try to prevent the area from falling into French hands. The Afrikaners resented the British presence and felt that the British were oppressive. When the British issued the end of slavery, the Afrikaners moved north to keep their slaves and they started their own government. The British did not pursue them until the discovery of gold and diamonds. Once this happened the British invaded. During this time many Afrikaner women and children died in concentration camps. As a people, they developed a mentality to self-reliance and fear of losing their independence. This mentality also helped create a fear of outsiders.

From talking with Chené and going to the Apartheid museum I learned the power of this fear and what it developed into. In the Apartheid Museum I saw how they had this fear of being overrun and losing their culture. They also had this idea that the native Africans should live in homelands. They called this separate development. The different native tribes were given poor lands closed off from each other. The native Africans also lost their right to vote because the Afrikaners felt that people without education shouldn’t govern a country. The government used the story of the Tower of Babel to to justify the idea of separate development. They said that when God made everyone in the tower speak different languages it meant that we are supposed to live separately. 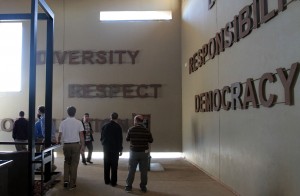 Throughout the years the Apartheid government became more and more radical. It’s policies created extreme poverty. Photos in the Apartheid museum showed the brutality of the government. They showed the police attacking protesters, the horrible living conditions in the townships, and mindless rules created during that era. For example, if a black doctor wanted to have a cup of coffee he would have to walk all the way home and drink it there. Cafes would not serve him. In medical school it was illegal for blacks to touch white cadavers. A concrete wall in the museum shows photos of all of the different acts passed by the Apartheid government. Most of these laws were passed in the 1960’s. That was possibly the most shocking thing to me, how they passed all of these acts in such a small period of time. It made me feel constrained. It was in this period of time that the anger of the oppressed grew and eventually turned into political movements.

When I first came here to South Africa I was curious to know the culture and a bit about Apartheid. Through my many conversations I have learned about the complexity of the history. It fascinates me.

We’ve learned a lot about South Africa in the time that we’ve been here. I’ve been most interested in the Apartheid era and how it came to an end. We visited the Apartheid Museum today and I found it very fascinating. As expected, the museum revolved a lot around Nelson Mandela, but at the same time emphasized the importance of others during that era, such as Steven Biko and Chris Hani. We had done tons of research on Mandela and were overwhelmed by everything he had experienced and accomplished. Visiting the museum was a reminder of the difficulties that a large population of people went through for numerous years.

Trevor Tutu, son of Archbishop Desmond Tutu, met us at the museum. He had many interesting things to tell us about South African history and Apartheid. He also introduced us to the curator of the museum. It was fascinating to learn about the design and process of building the museum.

The day we visited the Apartheid Museum and Soweto many camera crews and reporters were camped out in front of Mandela’s house in Soweto waiting for his passing. Many people thought that he only had a couple hours to live, however, as I write this he is still in this world. I’ve gained a tremendous amount of respect for him over the last year. It began when I read his book Long Walk to Freedom, and has continued to build, culminating in our visit to the Apartheid Museum. I will forever remember the great qualities he possesses and view him as a great inspiration and leader.