Layli Miller-Muro is the Executive Director and Founder of the Tahirih Justice Center.

Layli Miller-Muro was straightforward, to the point, and sincere about everything that she said. This made what she said more meaningful and understandable for me. I was struck by the way she embodied fearlessness. She said, “A lot of the obstacles in life are due to our fears, not our experiences.” She went on to talk about how rather than ignoring our fears, we should confront them. By being self-aware of what triggers our fears, and by understanding them, we can deal with them.

Layli Miller-Muro said, “The truth is, humility is something you develop through experience.” I believe her experiences working with clients, the people she sees as her heroes, has helped developed her humility. By facing her fears, and putting herself through difficult experiences, she learned about herself and developed humbleness. Layli Miller-Muro is a great example of a person who fights for what she believes in no matter what. I find that to be inspiring. At the end of the interview, I realized that there was not a moment when I wasn’t captivated by what she was saying. 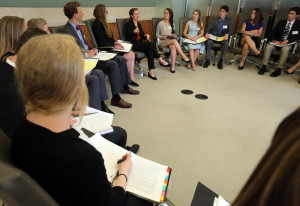 I was surprised when Layli Miller-Muro declared that she did not believe in “isms.” Her declaration was in response to a question concerning the stigmatization of feminism in today’s culture; this was not the answer I expected from her. However, as she explained her ambiguous feelings towards the label of feminism, I started realizing my own doubts about this term. Layli Miller-Muro explained that she didn’t care about other people’s definitions of feminism because, depending on the person, the definition can vary dramatically. Underneath the labels and generalizations that fall under feminism, there are many basic values and theories that people lay claim to. Layli Miller-Muro has a firm sense of her own values, and whether they fit into someone else’s idea of what a feminist is, is irrelevant to her. Labels are made to box someone into our own expectations and limitations, and as Layli Miller-Muro explained her views on feminism I realized that I had assumed that I knew what her stance on this complicated term would be. Layli Miller-Muro said, “I believe in deeds above words.” This statement resonated with me as I realized that no label, she or I put on her, would change the great work she has done; both in reforming the asylum laws in America, and in saving the lives of countless girls and women from around the world.

Sitting in the dining room area of the Pilgrimage and reflecting on the day, I feel exhausted and grateful for the cool basement air, but more than that I feel inspired – awestruck even, by the incredible woman we just spoke with. Layli Miller-Muro is truly a force for positive change in this world.

When we arrived at the office, after our mad dash through the streets of D.C., we were all overheating and out of breath, but I could hardly sit still because I was so excited to meet her. I, along with about half of the other girls, had read a book she co-authored called, Do They Hear You When You Cry. It is about a case she won as a law student that resulted in changing the asylum laws in the U.S. to include refuge from things like forced marriage, female genital mutilation and honor crimes. This story, in combination with extensive research and discussion, provided me with the context I needed to fully appreciate her brilliance. 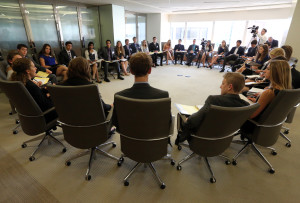 Layli Miller-Muro strikes me as a person who has figured something out that many of the rest of us would do well to learn from. It’s hard to name – this thing that she has. Maybe it’s a balance of passion and humility, maybe it’s a strong sense of morality and an understanding of what is worth fighting for, or maybe it’s a deep appreciation for the good in the world, and fiery detestation for the bad. Maybe it’s a combination of them all. Whatever it is brings a sort of clarity to her thoughts and actions that is profound and inspiring.

If you pay attention, talking with someone like Layli Miller-Muro is a little like having someone take your fragile reality, give it a chiropractic adjustment, and set it down sideways. After you leave, you find yourself questioning your entire perspective of the world, and yet everything seems to fit a little better than it had before. I find that it often takes time to take in everything they say – to get your body moving naturally after the shift – and I expect that it will take some time for me to incorporate everything I learned today into the way that I live my life. I am confident, however, that Layli Miller-Muro’s words will stay with me, and that whatever my path ends up being, they will serve as stepping stones for me in the right direction.

When speaking about gratitude, Layli Miller-Muro said, “I have been blessed with both privilege and challenges.” I am honored and privileged to have gotten the chance to speak with her today. Because of my time with her, I now see more clearly the challenges, both internal and external, that I will strive to face with as much courage and integrity as she has. I feel the gratitude, and now I have the capacity to act on it.

1 thought on “Interview with Layli Miller-Muro 2014”