Jeff Flake is a Senator from Arizona.

Going into the Senator Jeff Flake interview I didn’t know much about him besides the fact that he is a Senator for Arizona and that he was a Republican. I went into the interview with a bit of a bias but I was soon proven wrong. When Senator Flake walked into the room he had a huge smile on his face, and he went on to shake all of our hands and introduce himself. Even though the small, crowded space limited where he could walk, he managed to make us all feel welcomed. 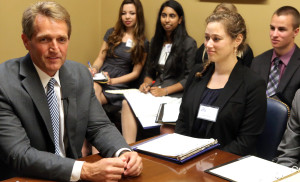 In the beginning of the interview he spoke about the fact that he is fifth in his family of ten siblings. This immediately caught my attention because I am part of a big family. As he went on he explained how he grew up on a farm in Arizona. He said that when he was a boy he read books about deserted islands and always dreamed of living on one. I enjoyed how straight forward his answers were and how down to earth he was. He gave me a different view of politics; he was personable and friendly rather than distant and busy.

Alyssa asked a question about a trip Senator Flake took to a deserted island. He proceeded to answer that he randomly chose an island on Google maps, got permission and flew there for a week. As a kid I dreamed of going on an adventure like this but never thought it could happen because of logistics. I wanted to test myself and see how long I could last on an island alone. Senator Flake made his dreams become his reality. He went to the island with very few supplies, and stayed for seven days and seven nights. As this adventure went on he had trouble entertaining himself. One day a hermit crab walked across his camp and he decided to write the number one on its shell. He did this for the rest of the trip, by the end he got up to 126 hermit crabs. Everyone started laughing as he told us this story because he was so open with us. Four years later Senator Flake went back to that island with his two sons and created a similar experience for them.

At the end of the interview we asked if he had any advice for us. He told us to take advantage of the opportunities we have, and also to take care of the earth because, after all, we only have one. As he walked out of the room he said, “Also go to a deserted island every once and a while.”

I left the interview with a completely different perspective than I came in with. Senator Flake opened my eyes about the different kinds of politicians there are. I felt like he cared about individuals. As advice goes, I am hoping that I can go to a deserted island and then tell him about the many hermit crabs I counted.

We just got back to the hostel after our interview with Senator Jeff Flake of Arizona. Although we only had a short interview with this busy man, he had a lot to tell us.
While researching him back at school before the trip, I read about his voting record and many of his political decisions. With the limited knowledge I had, I didn’t really understand why he made the choices he did. I was intrigued by him and wanted to learn more about his decision-making process and the reasons behind his actions.

One particular vote of his that interested me was his support of the ENDA (Employment Non Discrimination Act.) This surprised me because of his personal belief that marriage is meant to be between a man and a woman. At first this puzzled me, but I began to think more about it and realized that there must be some sort of reasoning behind his choice. I began to form a question around this information, and after much tweaking I came up with something I was proud of. Excitingly, I was able to ask my question during our interview and he explained the thought process behind his vote. He said that there is a point when you must put the needs of the greater good above your own, and rise above discrimination if you know it will help the population overall.

He told us funny stories about living on a deserted island for a week and numbering hermit crabs (“I still miss number seventy-two…”), and intriguing information about his transition from the House to the Senate. This made it an extremely interesting interview and I learned a great deal.

Today we interviewed Republican Senator Jeff Flake of Arizona. The interview was held within the Russell Senate Building, an impressive edifice containing numerous conference rooms and offices. As we waited in one of the building’s many hallways, Senator Flake’s Communication Director, Bronwyn Lance, greeted us. While we waited for Senator Flake, she told us about her job and its many tasks. After her comments she entertained a few questions from us, further telling us about her work which is primarily speech writing. Soon our discussion with Ms. Lance ended and we were shown into the conference room. 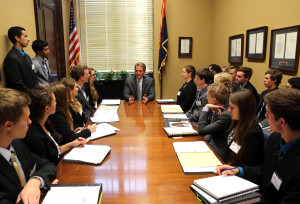 The room, though nice, was far smaller than any we had previously conducted interviews in. We packed ourselves into the small space. Some students were able to sit at the interview table, while the rest sat in chairs against the wall, or stood on the sides of the room. As we began to prepare our questions, Senator Flake walked in and we stood up to show respect. We knew that the interview would have to be short because of the Senator’s busy schedule, so we only chose the best nine questions to fill the 30-minute interview.

We asked Senator Flake a variety of questions about his work, and his views on many different issues. At first he seemed a little reserved. However, after we asked him about his deserted island adventure he opened up to us, sharing amazing and humorous anecdotes about his time on the island. One of the things he told us that struck me was that humor is an important tool for getting through challenging experiences. He told us that there is no better way to get through a tough situation than finding something funny about it and focusing our energy on that rather than on the negatives.

Senator Flake also told us that amazing experiences are more meaningful when you can share them with others. He used the beautiful sunsets, which he saw on the deserted island, as an example of a remarkable occurrence that gains meaning by sharing it with others. He also told us that he wants kids growing up today to have the same opportunities he had when he was younger. He wants them to be able to better themselves through hard work, and that the only way this is possible is by stabilizing the U.S economy and finding solutions to the major problems facing the nation.

The last thing he shared with us was a piece of advice, which we have been given in many past interviews; he said that we need to take advantage of the amazing opportunities we are given. The fact that so many people we have interviewed have told us this, shows me what an important bit of advice it is.