Congressman Jared Huffman drew me in right off the bat. The fact that he played for the United States Men’s National Volleyball Team, winning All American three years in a row and being a setter (my position) definitely helped in getting me interested in Congressman Huffman. 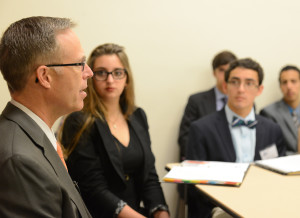 One of the questions we asked him during the interview was, “I read you that you had an outstanding career as a professional volleyball player. In your time playing on a national sports team, what values did you take away that you are able apply to your career as a politician?” I found his answer to be highly encouraging, and it gave me some ideas about possible career choices in my future. I have never really been clear on what I want to be, although I have had a bunch of ideas about jobs that I thought would fit me well. When he replied that being able to work as a team translates into almost every career path, my confidence was boosted; I realized that I could excel in a job where teamwork was required. He also said that as a setter you really have to focus on the moral of the team. You need to keep a level head, while at the same time being enthusiastic. This really rang true for me because as a setter you have to stay calm because you are making all the decisions, but you also have to be energetic to help keep up a positive team attitude. I had already thought that being a firefighter would be a good job choice; his answer to this question solidified my decision. 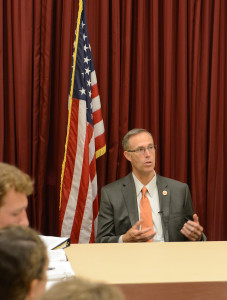 We arrived almost an hour early for our interview with Congressman Huffman, which gave us plenty of time to sharpen our questions and practice for our final interview. The room was filled with emotions—anticipation, excitement, exhaustion, and a bit of sadness at the knowledge of this being our last day in Washington D.C. This fed the energy of the group, and when Congressman Huffman arrived everyone was alert and ready.
Like many people we met this trip, Congressman Huffman is humble despite his many accomplishments. From being an All-American on the USA men’s national volleyball team, to playing a key part in the implementation of Title 9 as a lawyer, Congressman Huffman has an impressive history in different leadership roles. This has translated perfectly into his new position in Congress. One aspect of Congressman Huffman that impressed me was his clarity and control of language. There were no pauses, no filler words or midsentence changes in thought; Congressman Huffman spoke as though he had been thinking up his answers to our questions for months ahead of time.

Our hour with Congressman Huffman went quickly. It felt like only ten minutes had gone by when Ward called for the final question which, following Mount Madonna tradition, was to ask the interviewee for advice. For the first time in the whole interview, Congressman Huffman paused briefly before speaking. He said to us, “You’re going to be leaders. Think about those who are less fortunate, and make a difference.” As we walked down the Capitol steps for the final time, I thought about Congressman Huffman’s words. Throughout this trip we have been privileged to meet with so many incredible people, all of whom are leaders in their own right. Being a leader can mean holding a position like Congressman or Senator, but sometimes the leaders that the world needs the most are the ones who don’t have titles, the ones who are simply trying to bring change and do good for their communities. As we headed back to the hostel for the last time, I made a silent pledge to myself to fulfill Congressman Huffman’s words. I will be a leader in my own life, and somehow, someway, big or small, I am going to make a difference.