The moment Congressman Sam Farr, the representative of the 17th district of California, walked in the room, I was immediately reminded of his jovial nature. I had loved his personality when he came to Mount Madonna School in September. This visit I was exhausted and bleary eyed. There was no denying it. I scribbled down the quotes that struck me, but sitting here now, I realize that I did not truly understand them until now. As I attempt to decipher my chicken scratch, I continue to uncover the insightful words that seem to come so naturally to Congressman Farr. 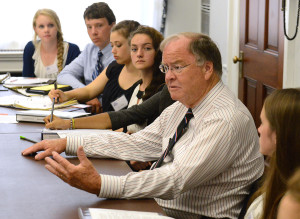 When speaking on preserving natural resources Congressman Farr said, “How do you put value on things that are feel-good, things that are happy, things that are joyous?” It’s a good question. There is a price on lumber but the value of stepping into a redwood circle and looking up at the tremendous might of the trees that surround you, and realizing how insignificant you are compared to the might of these giants, cannot be forced into a physical number. Congressman Farr works every day to attempt to communicate these feelings in order to preserve the natural world for generations to come.

“I think passion is so dominant an emotion that it really can sustain you.” As he said these words, I could see the passion glowing behind his eyes, and I realized why so many people love him. Because he loves them back, and because he has a passion for his job.

After having an amazing time with Congressman Farr earlier this year, it was great seeing him again. It seemed like he had a blast too because he left our interview filled with energy. He loves the fact that our school focuses on bringing awareness of the people around us, and ourselves. He also always compliments us on our questions. 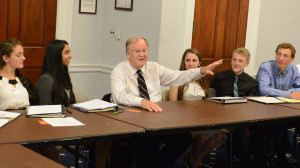 During our conversation he talked about a disconnect within congress that he thinks partially results from their need to travel constantly. This takes a toll on their families, their relationships with other members of congress and themselves. He further pointed out that the men in congress are always expected to have their time split between D.C. and their state, so every week they have to fly in between places. This prevents them from getting a decent amount of rest and from having much of a social life.

Another thing that Congressman Farr talked about was that if you are not ready for college you shouldn’t go right away. He said to find other things to do: get a job or travel; find your passion, something that will drive you for the rest of your life. This notion of passion is a popular theme in D.C. 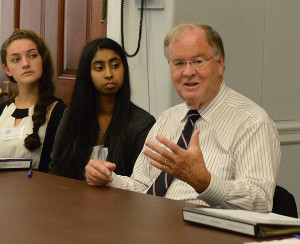 Every time I go to Colombia I notice a U.S. presence there and I’ve questioned whether it is best for the country or not. I feel that Colombia has needed to rely on the U.S. to help solve its internal conflicts. I asked Congressman Farr if he had witnessed this, and if he had seen any changes since he was in Columbia in the Peace Corps. He said that Colombia has stepped up, and that it has used U.S. help well. They have tried to become a better nation, and become more like the United States, in terms of trying to uphold human rights amid all of the violence that they have gone through. He also said that they were leaders in South America in many ways, such as having the first airline. He said that more Colombians come to the U.S. than any other South American country, and that there is a strong connection between Colombians and Americans.

My time with Congressman Sam Farr was precious to me because I was able to connect with a man who deeply cares about South America. After our interview he told me, “Por afuera soy gringo pero por adentro soy paisa. ” This reflected his love of Colombian culture, and it meant a lot to me, as though our crossings were meant to be. 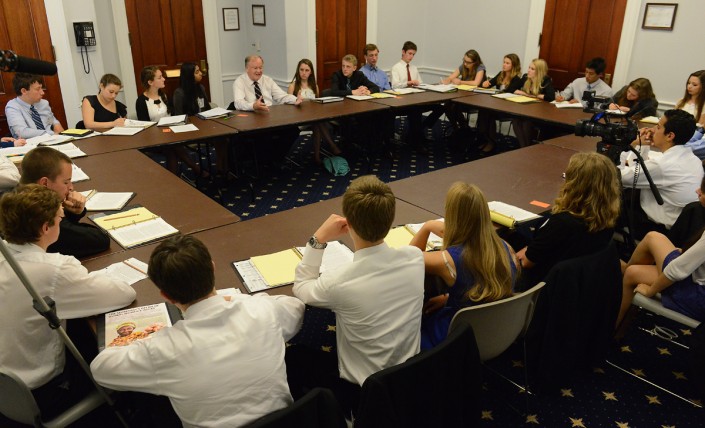