When Congresswoman Tammy Duckworth wheeled into the room, a huge smile on her face, I got that surreal feeling one sometimes gets when meeting a celebrity, that makes it hard to believe it’s really happening. When we first found out we would get to interview her and began our research, her group immediately became one of the most popular groups to join. Within a few days we had more questions for Congresswoman Duckworth than almost anyone else. 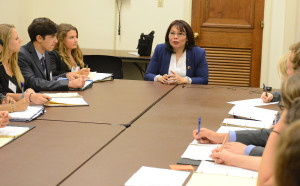 Congresswoman Duckworth was one of the first Army women to fly combat missions. She was deployed to Iraq in 2004, as a Blackhawk helicopter pilot for the Illinois Army National Guard. During a mission an RPG hit her helicopter. She lost both of her legs and partial use of her right arm, but miraculously made it out alive, even managing to help land the Blackhawk before losing consciousness. She spent the following year recovering at the Walter Reed Army Medical Center. Since then, among many other things, she has been a passionate advocate for better care for veterans.

One of my favorite quotes reads, “Anyone can give up. It’s the easiest thing in the world to do. But to hold it together when everyone else would understand if you fell apart, that’s true strength.” To me, Congresswoman Tammy Duckworth embodies this strength. She is a true example of someone who went through something traumatic and life altering. She could have come out of it a victim, feeling sorry for herself, and having everyone else feel sorry for her, never questioning it for a moment. But instead she came out strong, courageous and determined to make her second chance at life really mean something. “I’m not letting some guy who got lucky one day in Baghdad decide my future,” she said in an interview during her time at Walter Reed. “If I stop flying it’s going to be because I want to stop flying, not because somebody decided for me with an RPG.” 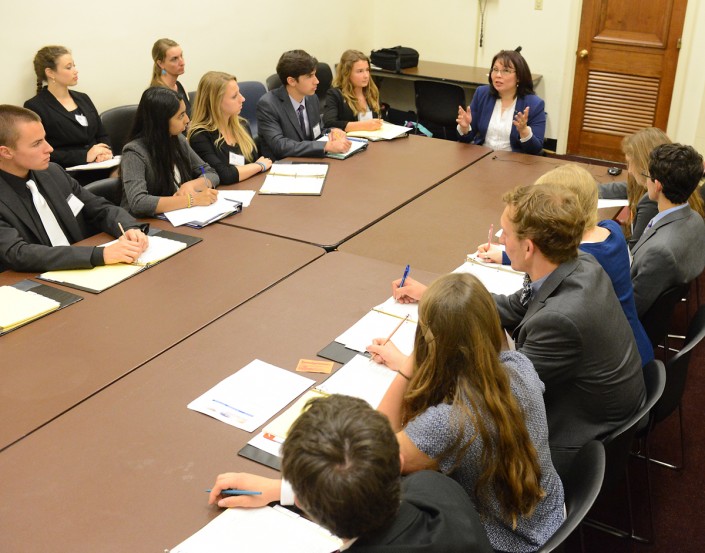 During our short time with her, this fiery determination showed. She talked about her story, the strength she had taken away from it, and how it had shifted her perspective of life, death and fear. “I never wanted to risk failure until I got hurt and survived,” she told us. “Then I realized there was nothing left to be afraid of.” She also talked to us about her experience in politics and in the Army as a woman. The main point I took away on this topic was that yes, there is still discrimination, and yes it is hard to face sometimes, but that really the answer is that women need to stand up to it and point it out when it happens. She told us that both evidence and personal experience have shown that, overwhelmingly, when a woman is discriminated against and lets it slide the crowd will side against her. However, if she calls it out right away for what it is, they will side with her. This is precisely what Congresswoman Duckworth has done.

I really admire Congresswoman Duckworth, and am honored to have gotten to speak with her, even for a short amount of time. Her story and her strength have helped me put my life into perspective, and see the value in the challenges that come with it. “You have to temper steel to make it stronger,” she told us. I believe she will be a source of inspiration for me to grow stronger, rather than weaker, as I face the tempering that life is sure to provide me. 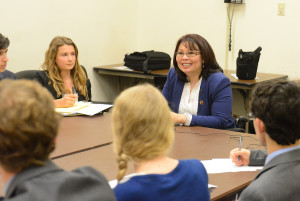 Congresswoman Tammy Duckworth is an inspiring person who has sacrificed so much for this country. She has love and dedication for the United States, and she strives to make it better. Her determination has never been chipped away. She is a true hero. She is not afraid to get down and dirty, and she will let you know if you’re not upholding the values of this nation.

Congresswoman Duckworth shared with us the message that if you are the butt of any joke or a victim of sexism you have to call the perpetrator out on it. I felt empowered after her wonderful interview.