Samdhong Rinpoche entered the room and his presence gave off a feeling of humbleness, wisdom and elegance. From the start, I knew that this man was going to be interesting. He spoke slowly, taking each word into account. We could see him analyzing every sentence, triple checking the words in his head, like one would when writing a school paper, before sharing their answer with the class. These were just some of his mannerisms; he was a calm, knowing and interesting individual. 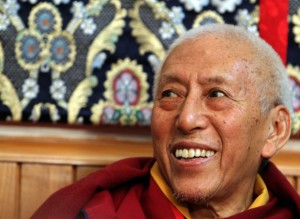 I hope I have painted some sort of picture by describing the important details of this remarkable man. A picture is worth a thousand words, and I would say that Samdhong Rinpoche’s words were filled with such meaning that they were worth a thousand pictures. He spoke of education, mindfulness in one’s actions, and knowing what is true vs. what is assumed. The comment that particularly struck me was, “Know the limitations of an ordinary mind, then cultivate and strengthen your own.” I understood this to mean that ordinary is merely a state of mind; it is a choice. This acknowledges the progression into the extraordinary for those who wish to seek that realm of mind. Patience, meditation, mental and physical exercise, and positive action, in every sense of the word, come together in order to bring each individual into the extraordinary spectrum in consciousness and strength of mind.

Something I have been struggling with for quite some time is the concept of mindfulness. It is a word I hear almost every day in values class, and increasingly it is brought up in all contexts of society. “Be mindful of what you eat,” “Be mindful of what you say,” the list of mantras goes on and on and on. But what I have never been able to grasp is how one can possibly achieve true mindfulness, to become fully aware of one’s thoughts and understand the consciousness that makes us into who we are. I want to be mindful, yet I feel that I do not know how to be so. Today, I had the opportunity to bring this question to a man who has spent a lifetime unraveling the secrets of our inner consciousness, and I was finally able to find peace in an answer. 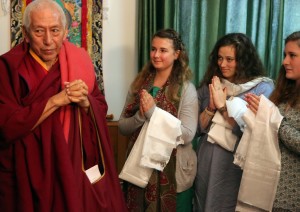 Samdhong Rinpoche is the most thoughtful person I have met in my life. During our interview with him today, he spoke softly in carefully chosen words, each syllable filled with meaning. After being asked a question, he would pause, sometimes for almost a minute, before gently delving into his answer. The responses he gave us were not generic or insincere—each one was powerful, overflowing with knowledge that comes from years of study and experience. My question for Samdhong Rinpoche was both open-ended and precise, a question that asked exactly what I wanted to know, “What does it mean to truly understand the mind, and how can one achieve this understanding?”

Samdhong Rinpoche gave a small smile at this, nodding his head slightly as he pondered. When he finally began to speak, his words took my breath away. “The mind has a long perpetuated habit of looking outward, and it itself is unaware. So we must force it to look inward. We have to argue with the mind, debate with our own mind, in order to find understanding.”

Samdhong Rinpoche spoke for fifteen minutes, and by the time he finished I had the answer I had been searching for. Mindfulness is a continual process, not some trait that you can develop overnight and have for the rest of your life. Samdhong Rinpoche opened my eyes to this, and gave me an answer to the question that has been eating at me since I first started thinking about the concept. Mindfulness is about the cultivation of your own mind and noticing the mind for what it is. As he so beautifully said, “Understanding the mind means that you are able to see the process of your mind, to notice it at the moment of its arising and just see it for what it is. That is awareness.”