Our conversation with Archbishop Desmond Tutu 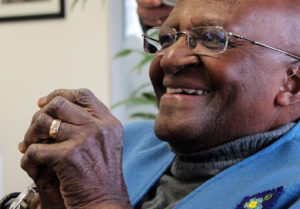 I had been dreaming about meeting Archbishop Desmond Tutu ever since I learned it was a possibility. He is retired and does not usually give interviews, so we were extremely privileged to have tea with him and the staff of the Desmond and Leah Tutu Legacy Foundation. We were seated in the light-filled office and waited a minute for the
Archbishop to arrive. When he did, I felt overwhelmed by the love and happiness he radiated.

A staff member gave a cup of tea to each of us. It was delicious, but I barely drank any of it because I did not want to lose a word Desmond Tutu said. He talked slowly, carefully, not content to use words that are almost correct. His voice sounded like pecan pie, if that were a sound: rich, sweet, and dancing with spices. On his wrist was a bracelet made from the kind of letter beads I used to string on elastic thread to spell out my name in elementary school art classes—only his spelled out UBUNTU, the South African concept that one can only be a human being with the support of other human beings. 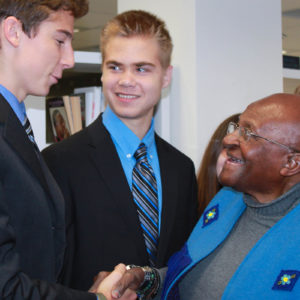 Of all the things he said, what struck me most was when he told us he felt an affinity with the Christian prophet Jeremiah. Jeremiah is often called “the weeping prophet” because of his struggle with the message of misfortune he was called to tell. At first, both refused the call to speak out against the evils of their world, but were ultimately unable to deny their destinies. He told us he has cried over the suffering he has seen and the problems left in the world that he must pass on to our generation. However, his grief is more than matched by his joy, his tears by his laugh. Desmond Tutu is a man who feels things deeply and I strive to have the same vibrancy. 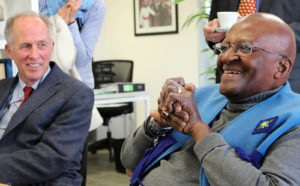 In the moment before the Archbishop Desmond Tutu makes his appearance, a silence overtakes the room. Even the receptionists stop furiously clicking at their keyboards. Slowly and then all at once, Desmond Tutu enters the room, smiles, looks to me, shakes my hand, and tells me he likes my trousers. I realize why the people he interacts with every day are excited; Desmond Tutu is spontaneity embodied. When we are done singing and introducing ourselves to him, we take our seats for the interview.

With Archbishop Tutu the aim of a question often goes awry in his answering. When we ask him to talk about his faith he tells us about his favorite prophet Jeremiah. Jeremiah was a reluctant leader and Archbishop Tutu likens this to his own experience during the struggle against apartheid. Then he discusses the responsibility of our generation and the value of education. When he finishes answering he has satisfied a hunger that I never knew I had. I start to notice how Tutu’s skin sags with the weight of time and tragedy, but his voice and laughter is touched by a contagious youthfulness. He takes a humble sip from a teacup that reads: “Everyone grows old, but you don’t have to grow up.” I notice the Tibetan slippers, wrinkled hands, reckless laugh, and Ubuntu bracelet that amalgamate into a human of true moral character. Ubuntu symbolizes Tutu. In his words it is defined as, “a person is a person because of other persons.” Desmond Tutu is a leader because people follow him without being asked to. I think about those around me: Sophia is a singer because people listen, Julia is a writer because people read, Amy and Haley are teachers because we pay attention, Sielo is a dancer because his friends at LEAP School play the drums, and we are all who we are because someone loves us. 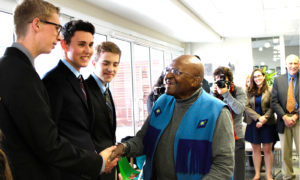 Today was the second day of our journey in South Africa and was filled with joyful memories and profound experiences. I had no idea what the day would hold, but I was ready to face anything. The day began with our interview with Archbishop Desmond Tutu, and I was slightly apprehensive of what was to come. We waited for half an hour at the Desmond & Leah Tutu Foundation. After being called in, and a brief wait in the lobby, we entered the main office room where the interview would take place. The walls and furniture were white and modern and led up to a graphic of the foundation’s tree logo that was printed on the window over looking the bay. After arranging everyone and sitting down, Archbishop Tutu entered the room. Standing up, we shook hands and introduced ourselves. After a few intimate moments, we got in our singing formation in the middle of the room, and sang “Shosholoza,” one of our main songs that we had been preparing over the last few months. The song ended, and the interview began.

The first of the two questions asked in the interview was on the subject of Ubuntu, which means, “A person is a person through other persons.” The question was on how we could cultivate interdependence and interconnectedness in a day-to-day basis through Ubuntu. His answer amazed me. He began talking about how a baby doesn’t go to school at a young age to learn language. A baby learns how to speak through imitation of other humans. He spoke about how a guitar player is essentially imitating other musicians, and both of these examples struck me in a whole different way. The idea of Ubuntu was so simple, yet so profound in the way he conveyed it. I had never thought of the imitation of other humans as a way that people became people.
As he continued talking, I noticed that he would pause between sentences and words, and this just reaffirmed his way of genuinely speaking his mind and how he cultivated his answers and ideas. It was an amazing and overwhelming experience to be in the presence of Desmond Tutu and a magnificent start to our journey in South Africa.