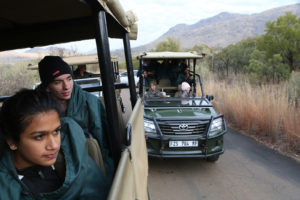 The last leg of the trip is finally upon us, and although for some of it I was awaiting these final days, the safari experience is making me wish it could last a little longer. Our first morning at Black Rhino Lodge has gone swimmingly, to say the least. When I heard we were to be at breakfast call at 6 AM, my hopes spiraled downward, for the thought of the dark and bitter cold was an uninviting idea.

After a night of tossing and turning, despite the comfort of my bed and the cozy cabin, I was met with a surprisingly warm breeze as I stepped out the door. Still shivering, a mix of excitement and cold, eight of our group loaded into a jeep. The guide immediately handed us insulated ponchos, which were a saving grace. My mind kept going back to the Indiana Jones ride in Disneyland as we set off along the rocky path towards the open savannah. Right away, my breath was stolen with the beauty of the sunrise; vivid reds and oranges lit the sky in beautiful bursts of light. 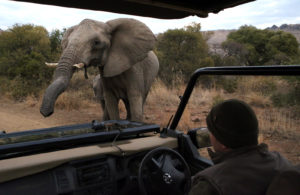 As the sun began to peak over the mountain range, the vehicle slowed to a stop. The others around me began exclaiming in awe, and as my eyes adjusted I could see what the fuss was about; just a few yards away were not one, but two white rhinos grazing gracefully among the grasses. One stood on the side of the road, its skin glowing against the dark landscape as this massive beast chomped up the grasses greedily. I was shocked to be so close to something I had only ever seen in books and films at school, I kept having to remind myself that this was real and there really was a powerful animal just feet away from our open jeep. Further on down the road, we encountered many impalas, wildebeests, some rodents hidden among the rocks, and were even greeted by an elephant mother and her baby. I was utterly in awe as the mother elephant, totally unafraid, walked straight up to our jeep and stuck out her trunk, as if saluting us on our journey. Giraffes lined the road, in groups of two or three, their massive bodies towering compared to our jeep. Each animal we saw gave another wave of excitement throughout the group, each one of us craning to get the best view.

One of the best parts was seeing two female lions stalk a group of impala, hunting for the rest of the pride. Even more enticing were the two male lions we saw later on, feasting on some wildebeest-like-creature. Jackals, little fox-like animals, danced around the feasting lions, waiting to scavenge the leftovers. It’s amazing to me that so much has already happened in a four-hour jeep ride around the park, seeing everything from hippos to crocodiles to brightly colored birds. This trip has been surreal, but this morning’s safari experience truly blew my mind.

Did I leave home fourteen or fifteen days ago?  Is it Thursday or Friday?  Did I change my socks? I don’t have the slightest clue. As our jeep hurdles through the African landscape everything escapes my mind but the present.  Swaths of grass cradle gazelle, camouflage lions, ripple like the gossamer surface of the sea, whisper stories, and dance wildly at the touch of wind. I forget the coldness gnawing at my bones. I embrace the spirit of an open-minded traveler, letting the bumpy road give me a massage with its crooked fingers. The sunrise confounds my worded thoughts. I become a stream of images inseparable from the thing itself. 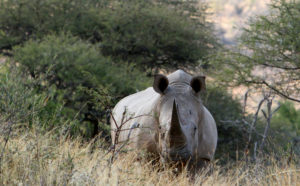 We slow down abruptly when our driver Johann spots two rhinos near the side of the road.  The rhinos have eyes the size of marbles and bloated lips, which give them the appearance of two old men telling inaudible tales to one another. As they turn their telescopic ears towards us, Johann tells us that rhinos face extinction because of the illicit market for their horn. There is a demand for the horn because of the fallacious belief that it will cure all ailments. The buyers will pay so much for the horn that desperate people resort to murder. The immediacy of the injustice causes anger to permeate every muscle of my body. It reminds me of the morally outrageous juxtaposition between the townships and the wealthy South African communities, between penury and my own community. I think back to our first interview with Thulani, an ex-prisoner of Robben Island. He told us of his own torture and the murder of his father. He told us that because of Truth and Reconciliation, the men who committed these crimes are free today. He was overcome with emotion when he said this, as if the injustice was too much for words. Yet I didn’t sense any hatred in his voice. Looking at the rhinos, I realize what I failed to understand in our first interview: I, you, and all of us do not have the room in our hearts for the emptiness of hate.

The soil of South Africa, of the whole world is fecund for change, for the growth of compassion. I feel the potential all around me. It is in the laugh of Desmond Tutu, in the smiling, playing, and dying youth of Botshabelo, and on the savannah, it intoxicates me with a child’s imagination. We need only to sow the seeds.