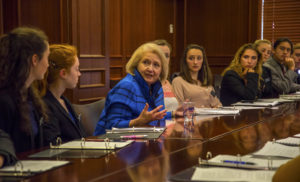 As soon as Ambassador Verveer walked into the polished room, I felt almost star struck. After being in the book group for the novel Melanne Verveer co-authored, Fast Forward, as well as the Melanne Verveer research group, I started to view her as a sort of fictional character. Seeing her walk through the door and sit down two seats to my left, I suddenly had the realization that Ambassador Melanne Verveer was sitting at the table awaiting our questions, the interview I had been waiting for was moments away.

The interview as a whole was extremely interesting and insightful, but what struck me the most was when Ambassador Verveer said, “We tend to make the perfect, the enemy of the good.” After hearing her say this, I realized that I tend to do exactly that. In just one phrase, Ambassador Verveer had shown me that my successes and achievements do not have to be defined by perfection, and in her words, “I’d rather have progress than super rich victory.”

In thinking about the DC trip in the weeks before we left, I was hoping that I would have a eureka moment in which I would realize that I didn’t have to be stressed about the next stages of my life and that I don’t have to have to know exactly what I want to do for the rest of my life. I was definitely not expecting to have this moment in the very first interview and for it to be even more impactful than I thought it would be. 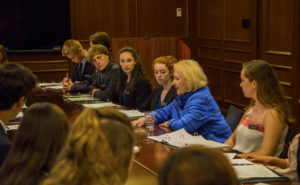 Melanne Verveer entered the room gracefully, carrying her experience that she was prepared to share with us. She sat down and we all rushed to our seats. As she moved through our questions, she talked about the progress that women have made around the world. She said that all this progress for women and girls is really progress for all people, regardless of gender. We listened as she addressed the long dark wooded table filled with faces of people that have been waiting for months to hear her wise words. She said that learning to understand people’s beliefs will change the way goals get accomplished and the way people interact in general. She talked about how women tend to work better together in communities because when things get tough, they seek out help and advice from others instead of trying to go it alone. She said that if we know how little time we have on this earth, it will give us more motivation to make a difference.

At the end of the interview we rose and I asked her if she would sign my copy of her book, Fast Forward, which a few of us read as research for this interview. In the book she addresses the formation of communities by women and the effect they have on the global economy and cultural diversity. We all gathered around for a photo, and I left the room with amazing advice, that only someone of her stature and background could provide, and a signed copy of an amazing book that offers stories and statistics of how women are making progress all over the world.

Today we had an interview with Melanne Verveer. I didn’t really know what to expect because it was our first interview in DC. We had all done a lot of research on her, so it felt like the first “test” for our group. What especially struck me was when she shared, “If you want to go fast, go alone. But if you want to go far, go with others.”

I thought this was very interesting because she summed up the key to success in just two sentences. On one side, if you’re alone, you have no one holding you back. However, you also don’t have anyone to support you. You could go too fast and fall, maybe even fail on your own path to success. But if you want to chase your dreams, you also have to catch it. Going too slow or hesitating could result in it floating away forever. For this option, I see this working for very fearless and ambitious people, people who have their life written out and ready to read. In Melanne’s case, she had to be brave and trust in her own intuition to lead her. She had to help spark courage within other women. 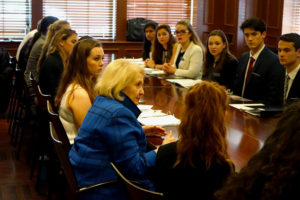 Those who choose to stand tall with others have the advantage and disadvantage of others’ opinions. If you ever feel discouraged or unmotivated, others will hold you above failure. It’s a slow but steady road to success. You could even use someone else’s knowledge to better elevate yourself. But without the openness to seeing your own flaws, your stubbornness could hinder you from moving forward. For Melanne, I think she had to gather other women to build an overwhelming force of energy. Without this, a difference may have never been made.

This is why I’d like to put my own thoughts into Melanne’s quote. I believe you need a little of both to succeed. You need to be able to motivate yourself to chase your dreams. But if you are headed off the trail, you also need others to help point the way. We need to know when to stand strong with others and when to soar by ourselves. I believe this to be the only surefire way to our dreams. Melanne has done many things to increase the confidence, rights, and safety of women. I think she is a perfect example of this combination, and I will take and use this newfound knowledge to chase my own dreams.

Today we interviewed Melanne Verveer, who has been rigorously focused on human rights pertaining to gender. Walking into her meeting room was intimidating enough. Polished wood and ceiling edges with intricate little boxes. I searched for dust, but there was none. When she spoke, she had the voice of someone who both put you at ease and commanded the room. She spoke light-heartedly. She smiled and laughed. Still you heard the knowledge and experience within her every word, and you clung to them. You could hear the pain and suffering she felt for the injustices that she had seen women around the world face. You were soothed with the steadiness of her message.

I heard that sound before in South Africa in the voice of Marion Cloete, who gave her life to caring for children orphaned by the AIDS epidemic. As I heard Melanne’s voice, I heard that similar dedication. At first I was confused. I am a girl, and though I have many more rights than the majority of women in other countries, I didn’t look at women’s rights as that large of an issue. I couldn’t be more ashamed to admit that; “good enough” isn’t good. Ignoring is the most effective and ignorant form of hate. I am not sure how to start to help or get involved, but Melanne Verveer has awakened me with her passion. I would like to thank her for her time and everyone for this trip.