Today we interviewed Susannah Wellford. She is the president of Running Start, and overall a very inspiring woman. We discussed that men and women live in two different worlds. Men don’t have to worry often about being sexually harassed or feel like they constantly need to look over their shoulders while walking home at night. What struck me was while this is a present issue, it is changing, especially as more men become aware of this issue and are working to fix it. Ms. Wellford talked about the growing awareness of women’s issues globally. She talked about the image of women shifting towards people seeing women as intelligent, successful, and capable. While this is changing, I still see these issues in my daily life. Ms. Wellford talked about kindness, respect, and authenticity as being key to having people see you as who you are and respect you for being yourself. Hopefully with the changing image of gender roles and more women feeling comfortable in being themselves, we will have more confidence to step up and do more. Other girls and I will be able to see a change, and feel that we are seen for who we are, and not a prescribed identity that our gender roles give us. 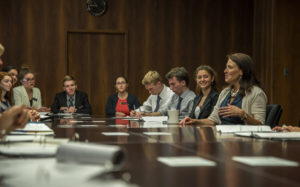 Susannah Wellford is a symphony of strength, wisdom and truth in a single woman. The knowledge she shared with us today was not only inspiring but needed in many more areas of the world. Feminism is a symbol of equality to many people, but to some it is a symbol of means to suppress men, which is simply not true. In fact, Susannah, along with many other feminists we have interviewed thus far, have all agreed men are necessary to be able to gain equality between all genders. We cannot exclude; we need to unite people, which seems like a basic necessity to achieve equality, yet it is something many people have either forgotten or overlooked. She opened my eyes to the responsibility every human being shares to make this world a happier and safer place. Susannah is a woman who has led this movement before many people even knew what it was. That takes bravery and trust in yourself and the cause you are fighting for. This level of leadership is not found in many people, but when that leadership is found, the power behind them is unstoppable. Her determination will spread to many more people and leave behind a new generation of leaders just as strong as she is. Without the battles she has fought in the past, however, she would not have bloomed into such a magnificent flower. The quote that stuck with me the most was, “You have to have spectacular failures in order to succeed. If you don’t fail you’re living too careful of a life.” This does not only relate to feminism, but school, work and life in general. Our society should not put shame on failure, but encouragement, which is exactly how Susannah has formed her feminist movement. Feminism may not be accepted tomorrow or even in ten years. But one day it will be, and that day is on the horizon with all the work men and women have put into this righteous cause. As a man, I am proud to be a feminist. 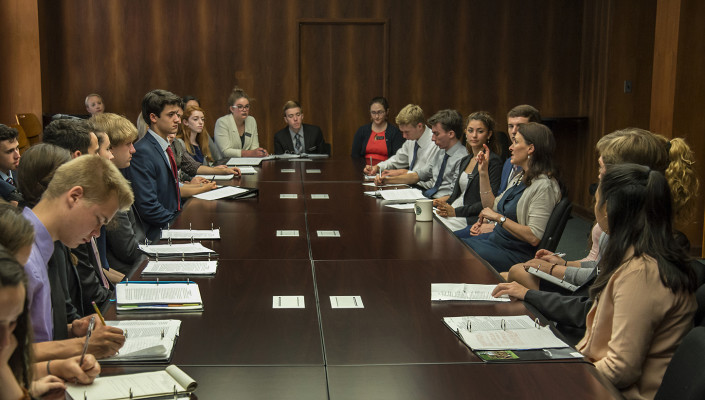 Before Admiral Stephen Rochon entered the room, I didn’t know what to expect. I never really know what to expect with any of these interviews. They’re always different from the way that I had envisioned them, which creates a certain aspect of surprise and excitement. Before I got out of bed this morning, I honestly wasn’t that thrilled about the day in front of me. I was tired and restless from the previous days of nonstop interviews and trekking around DC. I just needed space to get some fresh air. But today was that moment of serenity and fresh air. Today gave me some room to breath and to think.

Almost moments after we finished the first interview of the day with Susannah Wellford, the President and Founder of the Running Start Program, Rear Admiral Stephen W. Rochon entered the room. When the Admiral opened those elegant wooden doors, the room was filled with a sense and feeling of respect, love and friendship almost instantly. After we went around half the room stating our names and grade, it was my turn. I said my name was Alex and that I was a senior. To my surprise, he returned my statement by saying that he had a grandson named Alex who was also a graduating senior of high school. Just from those few words, I felt instantly connected with what he had to say. Later into the interview, he mentioned the importance of the mentor and the mentee. He said that you have to collect as many mentors as you can in your life, which I found myself connecting with a great deal. In my life, I have found many mentors or teachers who help me pursue what I am passionate about and help me find ways to achieve what I’m passionate about, including my parents, friends from school, teachers, and friends from New York. I’ve found that these people are more than ‘mentors’ to me. They’re family. One quote from the Admiral I found really connected to this point. The quote is, “People don’t work for me; I work with them.” Something I have learned from this is that when people work for me, or I work for people, we’re just working with each other. We’re both gaining something from the experience and opportunity. Take on all the experiences you can. You may fail, you may not, but that’s not what matters. What matters is the journey and what you learn from the journey. 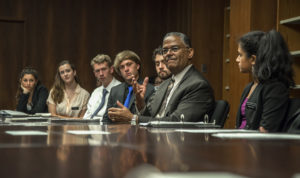 Admiral Rochon’s scope of experiences was so incredibly broad, and yet he managed to maintain a personal aspect to it all that oh-so-often is lost in the fray of progress. Regardless of what we asked, he remained resolute in his insistence that people mattered above all. When he described being the Chief Usher of the White House he spoke on how he was meant to manage a number of people. At no point did it seem like he saw those he oversaw as anything other than peers. They were working with him as opposed to for him. It was some pretty neat stuff. 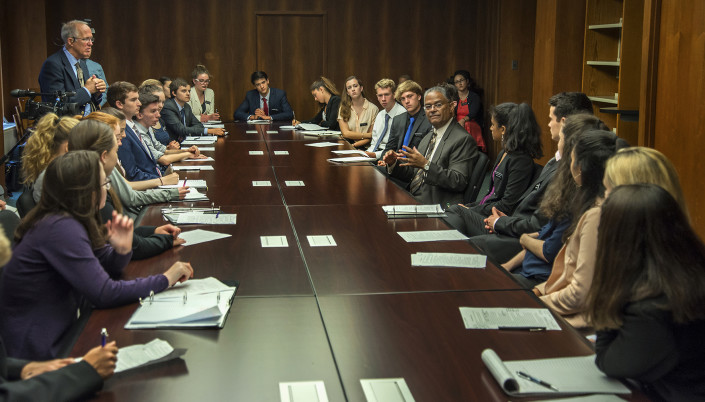 His words on how vital his mother was to his development were heartwarming to say the least. I would say that the way he spoke on his mother was passionate, but I don’t know if that’s necessarily the appropriate word to use. It was just such a powerful level of love and sentimentality; you had to be there to fully appreciate it. “When I was a boy, I thought we were rich,” he mused wistfully. As it turned out, his family was not anywhere in the vicinity of being wealthy. In spite of this, his mother pushed as hard as she could to give young Rochon every opportunity she could. “I guess that’s why we enjoyed red beans and rice so often,” he chuckled. 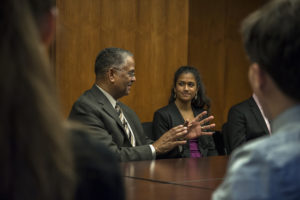 Before I think anyone could register what was happening, the Admiral walked in. We had just finished our interview with Susannah Wellford and were scrambling to inhale our lunches when we heard an unfamiliar, “Well hi!” from the doorway. We spun around to see Admiral Rochon standing there, grinning. I could tell he was a wonderfully kind man from the beginning, but as the interview progressed I fell for his humility, presence, and sincerity. He told wonderful stories from his past, reminiscing on his core memories. “When I look back on my life, I have no regrets,” he said. But despite his general likeability, something that struck me was how genuine he was. There was no particular moment, no specific quote, no story of his that stood out over the rest, but the fact that you could immediately realize how good of a person he was and see how hard he has worked in his life is absolutely inspiring and motivating. I felt honored to hear his responses and have the chance to interview him. He is a man that I will never forget.