As we patiently awaited the arrival of Evan Ryan, I read my question over and over, trying to engrain each word into my head, although I knew that when the time came, my nerves would disable my ability to look up from my paper. Every time I heard the thud of the door closing, my heart would skip a beat. After doing so much research and work on this interview, I couldn’t seem to shake the idea that she would enter the room and not be the person I had worked her up to be in my head. While we waited, Enriqueta Tamayo, who was filling in as Evan Ryan’s assistant, told us about her work as a Foreign Service Officer. She spoke about the myriad of countries she has lived in including Pakistan and Botswana and said that Uruguay would be her next adventure. While she was telling us about her nomadic lifestyle and career, something clicked in my head and I thought, ‘That’s what I want to do.’ All of the ideas, plans, and hopes I’ve had for what I want to do in the future all just pieced together and the interview hadn’t even started yet. 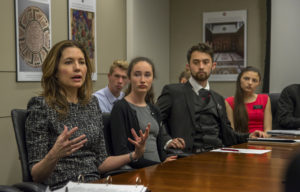 Evan Ryan walked into the room with an aura of confidence that was impressively balanced with humility. She sat down in the seat next to me and the interview began. In her position as Assistant Secretary of State for Educational and Cultural Affairs, she is an ardent advocator for studying abroad which is something I desperately wish to do. Therefore, the entire interview was very interesting and inspiring for me. However, one thing in particular that struck me in the interview was when Assistant Secretary Ryan told us a phrase one of her mentors used to tell her: “You should always feel like your head is a little bit underwater.”

This strive for challenges seemed to be a theme of the interview. “Don’t be complacent, challenge yourself because otherwise you’ll get bored,” was one of the many pieces of advice she gave us along this theme. This idea was very intriguing for me as I have always thought that once you overcome a challenge, you can relax and just float by because you’re no longer faced with difficulty. However, Assistant Secretary Ryan introduced me to the idea that you should always be faced with challenges. She even told us that once she feels like she knows all of the answers, she knows that it’s the time for her to change jobs. 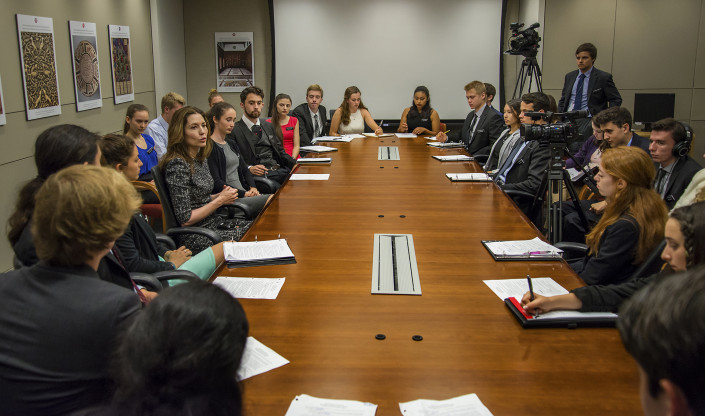 While doing research on the Assistant Secretary, we got into a discussion about the process of returning from traveling and sharing our experiences with our community. It came to our attention that many people who return from overseas and have experiences that change them in some way are not able to integrate back into society and are faced with severe isolation, which in extreme cases can lead to isolation and depression. I thought this point was very interesting as everyone focuses on the abroad part and the actual experience, but we rarely think about the changes a person goes through after such an experience and how these changes make it difficult to integrate back into society. We asked Evan Ryan if the State Department has something similar to the presentations we do in returning from trips. Her response was that she meets with the students personally once they’ve returned. This caused me to admire and respect her even more than I already did. It showed me how personally invested she is in the work she does and the students she sends abroad. I hope to be doing something in the future that I love and enjoy so much that I can be as invested in it as she is.

Overall, Assistant Secretary Evan Ryan lived up to and went beyond my hopes and expectations. Her concise yet thoughtful responses were inspiring to say the least and helped me put into words what I have always wanted to do with my life. There was a moment after she had left the room and we were packing up our gear when I suddenly stopped and envisioned myself in twenty or so years in the very same room I was standing, but not as a student, as a Foreign Service Officer, or Secretary, or maybe even an Ambassador.