Kathy Calvin is the President of the U.N. Foundation.

“Everyone has this vision that a ladder is the way you have to move through an organization. Today’s world is actually a lattice and so the definition of growth is really changing.” As Kathy Calvin, President of the United Nations Foundation spoke, I imagined a spiderweb of connections spreading out from each of us sitting at the light-filled conference room. I saw the threads extending through the windows of the seventh-story office across the city skyline and beyond. I saw hers run from the woman sitting before us in a gold and black checked jacket and hammered gold teardrop to the previous jobs she held in government and for-profit business and from all of us to the careers we will one day pursue. She explained that there are valuable lessons to learn from each sector and every job. Specifically, we can bring the efficiency of business to the non-profit sector so we aren’t being wasteful with resources. What really struck me about what she said was that there’s a common thread that has been in every one of her jobs.

She is a translator; she has a gift for understanding complexity and explaining it to others in simpler terms that remain accurate and meaningful. That was clear from the interview today. She spoke with a clear precision that conveyed both her tremendous intellect and her driving force to find solutions for our most pressing world issues. The threads I saw radiating out from each of us changed meaning as I realized they represent the qualities each of us has to foster. So I saw that as the paradigm shifts from ladder to lattice, the notion of leadership must also shift to one in which each individual in an organization is responsible for leading in some way. 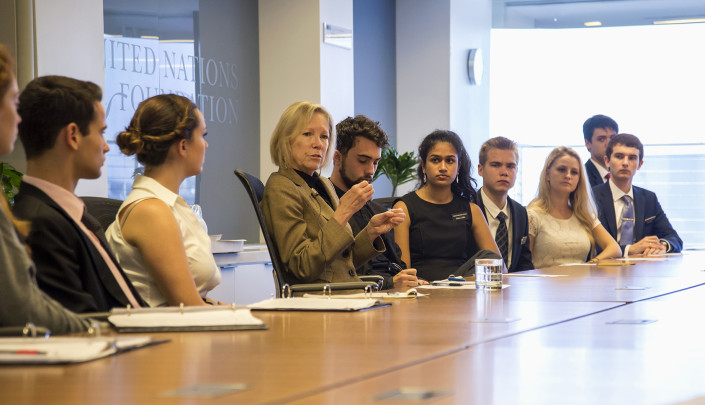 Just as Kathy Calvin directs her organization as a member of the team, the UN Foundation works with developing countries in a partnership. We have talked a lot in class and on this trip about the danger of a single narrative and the problems that come when we try to help people in other countries without first understanding what they need and want. With very little explanation from us, Ms. Calvin leapt to the subject, one that she was clearly passionate about. She said: “We’re moving away from a world where it is top down to one of co-creation.” I was impressed by the amount of thought she had put into the problem. The solution she gave was two-pronged. Listen to what people say they need because they are the ones experiencing the issues and collect and read data in better ways to see what may not be apparent close-up. An example she gave of how data can make a difference is how children zero to five-years-old are given a lot of attention by the international aid community, yet for girls especially, from age six until they have their own children, foreign aid disappears. The phrase is still ringing in my ears: “The girl in the middle was being lost.” I had never thought of it that way before. Again I saw a connection between the office in which we met and the work the UN Foundation does in developing countries worldwide.

Though Ms. Calvin never made a big deal about being a woman in a high position of power, it became apparent that her perspective helped her see how necessary women’s rights are as a focus of humanitarian work. I couldn’t help noticing the assertive way her earrings swung as she passionately translated her experiences and lessons to our group. I left the room inspired and elated. In all ways I try to make a difference, I want to cultivate the power of quiet leadership within myself.

A common theme throughout our trip has been the value and the responsibility of the younger generations. Just about every person we have interviewed has told us that we are the future. That we as a generation have the job of taking on the problems of the world from a new perspective. It is a weighty responsibility, a torch that we are handed whose original bearer knows not where we will take it. Of all the amazing powerhouses we have met, I think Kathy Calvin is the most understanding of and the most curious about our generation and what we will do as we move into prominence. 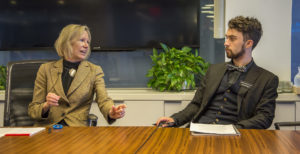 Kathy Calvin is the president of the UN Foundation, an organization that advocates for the United Nations within the U.S. While many older generations are hopeful for the unseen possibilities we might achieve, she is the first who clearly outlined the possibilities she does see. She sees us as having shifted to more egalitarian views of the world. Stating that we are considerably more color, race, nationality and especially gender blind than many before us, and that in some ways we can be very class blind. We appear to be a good step forward for the rights movements of the past century.

Ms. Calvin also thinks it likely that we will start to move away from the corporate ladder. Instead of climbing from one title to the next, we may instead shift from one position to another as needs, abilities, and interests arise. In fact she sees much of the future as far more fluid. As people turn to trying to help make change in place of simply providing charity, non-profits will become more efficient and business should become more philanthropic. The lines between them will become ever more blurred, helped in no small part by improving technology and connectivity. Our generation is the first to grow up in a world with the Internet, and we expect data and information at speeds that are unprecedented. While the criticisms that are often leveled at us about our problems with face to face connection contain a measure of truth, we do interface with each other in new broad ways that are unexplored.

We are new. In many ways we are different. No one yet knows what among those differences will help us, but Ms. Calvin holds hope for our abilities, and that is a weight on my shoulders, a weight of responsibility for which I feel prepared and ready. Bring it on world; here we come.