“Do not let the grass grow under your feet, always keep moving forward,” said Congressmen Jimmy Panetta as we all sat around the table listening intently. He was our first interview of the day, and I couldn’t wait to get the show on the road. Congressman Panetta represents our district in California, and it was fun to see him again in Washington DC. I was ready for something even more powerful than what he brought to our classroom last year and of course, he delivered. Panetta speaks with conviction and confidence, and he works hard at everything he does. He acts as a role model and serves his constituents’ needs. 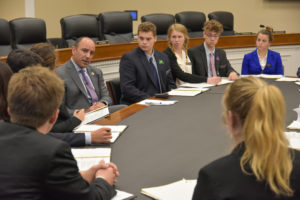 I was inspired by Panetta’s life path that brought him to where he is today. He didn’t know where he was going or what to expect. Panetta took advantage of every opportunity that called out to him and decided to start saying YES. That impacted me because I have been told to do that my whole life and haven’t started taking advantage of that until just recently. I think it is very important to attack an opportunity because most likely it will lead to success. Panetta said, “To find a great mentor, look for the person who is willing to work their hardest.” Being the powerful man that he has become, we could all see that he followed a path of hard-working mentors and was inspired by their success and intelligence. I think that Jimmy Panetta showed us that it is okay to not know your path because eventually you will find the right path and passion. I don’t know where I will end up, just like Panetta, but I will keep moving forward and not let the grass grow. 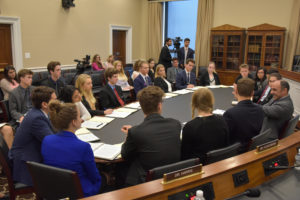 It was an extremely rewarding experience meeting with Congressman Jimmy Panetta today. He came to us so eager to emphasize that he wanted us to connect with our community and give back to the public. Congressman Panetta explained the path that got him to where he is now, and he explained some of the most important values he learned throughout his long journey. He put a lot of emphasis on the idea that we should always be taking opportunities that are presented to us and that we should “never let the grass grow under our feet.” This message meant a lot to me because I know that wherever my life may take me, I want to always strive to keep moving forward.

Jimmy Panetta is a powerful role model and a man who has dedicated himself to serving the public. The DC trip has greatly expanded my mind and inspired a lot of creative thought. Our interview today with Panetta was a key part of this journey. He had an infectious energy that he brought into the room, and he expressed very serious commitment to represent us on a personal level. He walked with a bounce in his step and spoke to us with a twinkle in his eye. He was so effective in getting his message across because he had clearly lived his life following a set of strong values. He explained the importance of doing the job that you’re doing fully, and he also highlighted the need for public service in order to be an engaged citizen. But most importantly, Panetta emphasized over and over again the power that your word holds. The most critical piece of being in politics and being in the workplace is maintaining a reputation for hard work and dedication.

Our second interview today was with Congressman Tom Cole. Tom Cole is a Republican and represents a fairly large district in Oklahoma. I was especially excited for this interview due to the fact that he is the only Republican we have interviewed so far. While almost all of my social views lean very much to the left, I was interested to see the contrasting opinions of someone who is equally as intelligent but on the other end of the political spectrum. I was intrigued by how Cole’s fiscal policy aligns with my own conservative values regarding fiscal policy. When we began our interview I was initially shocked when Cole decided to go directly to answering our questions instead of giving us opening remarks like the other people we had interviewed. 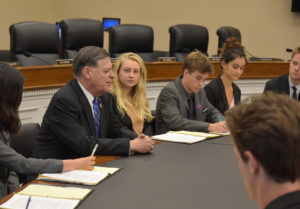 The first thing that fascinated me was how much he believed in the power of collaboration with his colleagues, the democratic congressman. This theme of collaboration has been prevalent in all of our congressional interviews so far as bipartisan cooperation has been so lacking in Washington recently. I was reassured to hear how the Republicans are also working to mend the gap between Democrats and Republicans. The way Tom Cole described this was that in the past the most conservative Democrats would be more conservative than the most liberal Republicans and vice versa. This created a sort of political overlap that made collaboration far easier since both parties shared some of the same moderate views. Cole went on to say that nowadays, there is barely any overlap at all. This really struck me because ever since the current cooperation issues have been so dramatized by the media, I have been wondering just why this actually was. Another key part of the interview was when Cole told us that opportunity shows itself in ambiguous ways. The concept of unexpected opportunity has been a huge theme in all of our interviews so far, and I found it fitting that it was highlighted in our interview with Cole.

As the trip unfolds, it seems to me that every interview is weaving together one fabric of wisdom. Almost all of the key points made by each person connect to one another in a sort of autotrophic way that begins to grow exponentially as connections manifest. As our first week of interviews comes to an end, I am really seeing the value of so many diverse and wisdom-filled interviews, and I am extremely curious as to how next week’s interviews will finish weaving the fabric of wisdom. 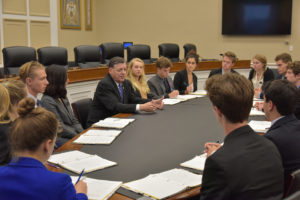 Congressman Cole is the first interview we have had thus far with a Republican politician. At this point in our interviewing process, we have been able to notice patterns and recurring themes. Because of this, we ask each person we are interviewing about their opinions on these themes. The most important one to me, and most of the rest of the senior class, is the need to stay open to options that come our way. Every person we have interviewed brought up, in some way or another, that they would never have had their current position if not for a butterfly effect of convenient situations and unexpected opportunities that came their way. In particular, Congressman Cole would never have been elected to his position if not for a promise he made to his mother to be her campaign manager for a local race.

Another common theme expressed by nearly every politician, which I thought I would never hear given how the media portrays the political process, is the need for bipartisanship. He expressed very strongly his opinion that making progress towards common goals is far more important than “winning the day,” meaning it is better to compromise than achieve nothing. Like I said earlier, this was quite shocking. When I arrived here, I fully expected the politicians to be self-serving. I am happy to discover that the vast majority of the time politicians want to work for what their constituencies believe in. They are hampered by those who would rather “win the day.” The media then blows their disagreements vastly out of proportion for what I can only assume to be the revenue because from what I have seen of these people I cannot, in good conscience, believe half of the things the media says about our political process. I will take this belief with me after this trip, and I have seriously began to consider a life of public service after seeing the caliber of human beings involved in the system.